I take classes at Dance 101 when I can (sadly, time and money rarely keep up with my inclination). Last Friday was a day that I could, so I went down to Briarcliff after work to see what was on tap.

Dance 101 is a drop-in studio; rather than signing up for weeks-long sessions of the same class like your mama did for you in your tutu days, each class stands alone. You can come any day, any time, and take anything offered, and then do it all differently (or not at all) next time. Most of the students, however, tend to commit to their favorite classes week after week. It's rather astounding, considering the turnover rate of the classes themselves. But because of my unpredictable child-rearing schedule--or perhaps just because I get bored easily when it comes to physical activity--I like to take advantage of the drop-in format and switch things up.
The problem is, I have a special knack for choosing the class with the least amount of people signed up for it. It's like that cursed mole-bopping game: the other class in my chosen time slot looks supercrowded and fun, so I aim for that one the following week, only to find four people are taking it and the class I took last week is jammed. Being in a small class isn't all that bad, except that there's less energy in small numbers. And you get put in the worst studio. And the teacher can see you if you slack off.

That is what happened to me last Friday. I chose to take the class that I did based entirely on the fact that its instructor had waved at me expectantly the week before when I was not taking her class, and I felt bad. Like so many do at D101, the class had some kind of crazy name based more on the type of music played than the style of movement. Essentially it was hip hop, with emphasis on the hip rather than the hop. The aforementioned instructor was the most adorbs chick ever, the kind you want as a friend, but who also has guys tripping over their dangling tongues: sugar-voiced, huge smile, messy curls, and super fit, but somehow looks like she'd happily eat a cheeseburger and tell fart jokes while watching football. Stark contrast to my brand of attractive, which we'll just call a specialized taste.

My body wasn't quite as enthused as my brain about dancing that day. Some weeks you accumulate exhaustion, building a wall brick by brick into which you smash face first on Friday at 5:00 PM. If I was hoping for a burst of energy from some heart thumping cardio dance moves, I was to be sadly disappointed. Cardio dance moves there were a-plenty. Energy bursts? No.

Do you agree with me, that it's tempting fate to announce at the beginning of a dance class that the combo is "definitely a solid level 1"? Just as starting a sentence with "don't take this wrong way..." pretty much guarantees that exact opposite result, whatever level a dance teacher thinks a piece is, it's the opposite. I know this because I teach dance. (To that end, I propose that every choreographer start off with the words, "this is the most challenging thing you will ever do."). So, to feelings of exhaustion and inferiority, add incompetency. Sooo muuuch grinding, you guys. Swaying. Bouncing. (Believe it or not, I actually do like hip hop. It's just that I'm a World Class Priss--I have trouble getting, as they say, low).

Another disadvantage to small classes: bodies fill time. Don't ask me to explain this mysterious but indisputable law of physics. The combo was short, and even though we all tried to stretch out the learning process, we still ended up running it five times back to back--twice. The intended result was an exponential and direct increase of joy and technical precision. The actual result was an inverse progression of sweat and patience.
We managed to endure, however, me and the three other slightly wilted class attendees. I didn't have the brain cells available to scrutinize the others--a happy change, actually--but I can say with certainty that on this day...none of us were feeling it.


After that, I decided I might need to cut my losses on Friday dance classes. Tuesday offered a conveniently timed and plainly-named ballet class. I went, and lo and behold, there was joy and dancing. Verily I tell ye I flew across the marley like a feather, despite being the least ballerina-looking person there. AND it was level two.


Posted by Janie Hitchcock at 3:07 PM 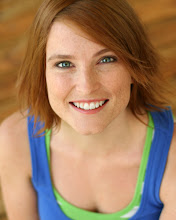